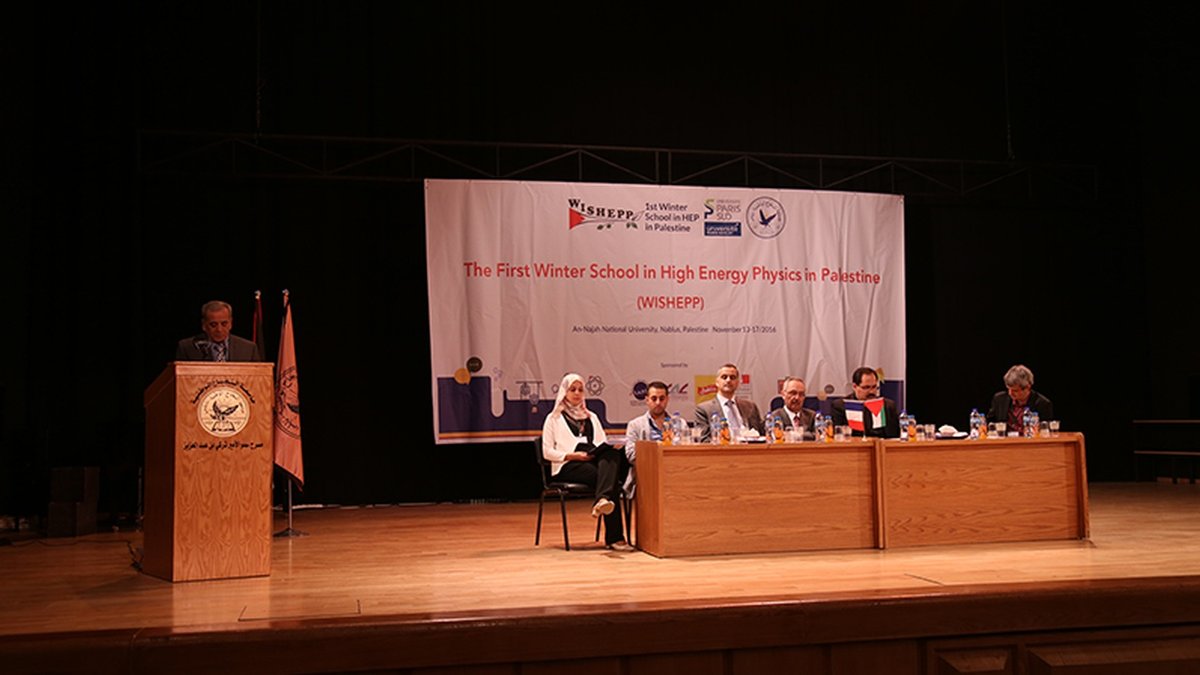 On Sunday, November 13th, 2016, under the patronage of Professor Maher Natsheh, Acting President, An-Najah National University in corporation with the Physics Department, the Linear Accelerator Laboratory (LAL) and the University of Paris-Sud 11 launched the activities of the first Winter School of ‎High Energy Physics in Palestine (WISHEPP) at the Prince Turki Bin Abdul Aziz Auditorium in the New Campus.

The idea of WISHEPP came from Dr. Ahmed Bassalat, Staff Member at the Physics Department and Paris-Sud graduate. Dr. Bassalat worked on this project during 2015 in cooperation with Professor Achille Stocchi, Director of LAL at Paris-Sud. 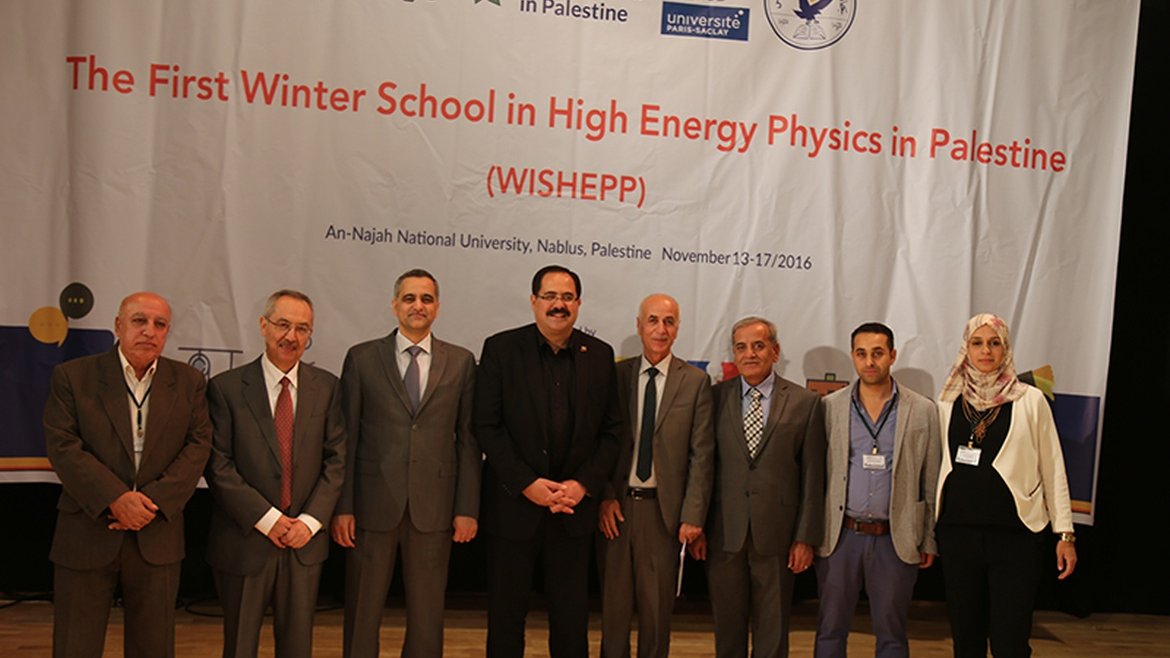 In the opening ceremony, Prof. Sami Al-Jaber, an International Advisory Board Member and Staff Member at the Physics Department at An-Najah welcomed the attendees and stressed the importance of the school in developing high energy in Palestine. He also explained the most recent discoveries in high energy physics like the Higgs boson discovery and the Gravitational Waves discovery.

Prof. Natsheh gave a speech where he thanked those who participated in organizing the Winter School wishing that it will benefit the university students in different scientific fields. He then stressed the importance of partnership between An-Najah and Paris-Sud 11 University.

He also commended the role of the Palestinian Ministry of Higher Education in promoting education as well as the Faculty of Sciences which has a distinct academic staff, students and infrastructure.

Dr. Sabri Saydam, Palestinian Minister of Education and Higher Education delivered a speech in which he also stressed the importance of launching the school as it is the first step to promote physics in Palestine.

In turn, Dr. Bassalat gave a presentation on the Winter School and talked about its programme and targeted audience.

He also talked in details about the activities of the WISHEPP which include lectures moderated by expert professors in different areas of physics, plenary talks on the latest scientific discoveries and seminars on physics and natural sciences for high school students. The activities also include a cultural festival that targets students’ parents and participating national institutions and NGOs.

Prof. Stocchi expressed his delight to visit Palestine and An-Najah and mentioned that his participation implies his passion towards physics wishing the Winter School to succeed in achieving its intended goals.

He also talked about renewing cooperation and partnership with An-Najah including staff and students’ exchange.

On this occasion, Dr. Bassalat announced that two of his students were accepted at LAL to continue their MSc under Dr. Hadil Abualrob supervision and his in addition to a third one who will be selected by the end of the school. Also, it has been announced that this school will be held periodically and annually.

It is worth mentioning that the school activities will be over five days from November 13th-17th, 2016.

The ceremony was attended by Prof. Allam Moussa, Minister of Communications and Information Technology, An-Najah Vice Presidents and Assistants, Dr. Ali Barakat, Dean of the Faculty of Sciences, Dr. Maen Ishtaiwi, Head of the Physics Department and a number of An-Najah academic and administrative staff as well as national and international scientists.

The event was also organized in cooperation with Sesame Research Center for the Middle East in Jordan, CNRS-France, AUF-Lebanon, SAPA, Soleil Synchrotron-France, DPG-Germany and CERN-Switzerland and funded by the French Consulate General and Maslamani Group.