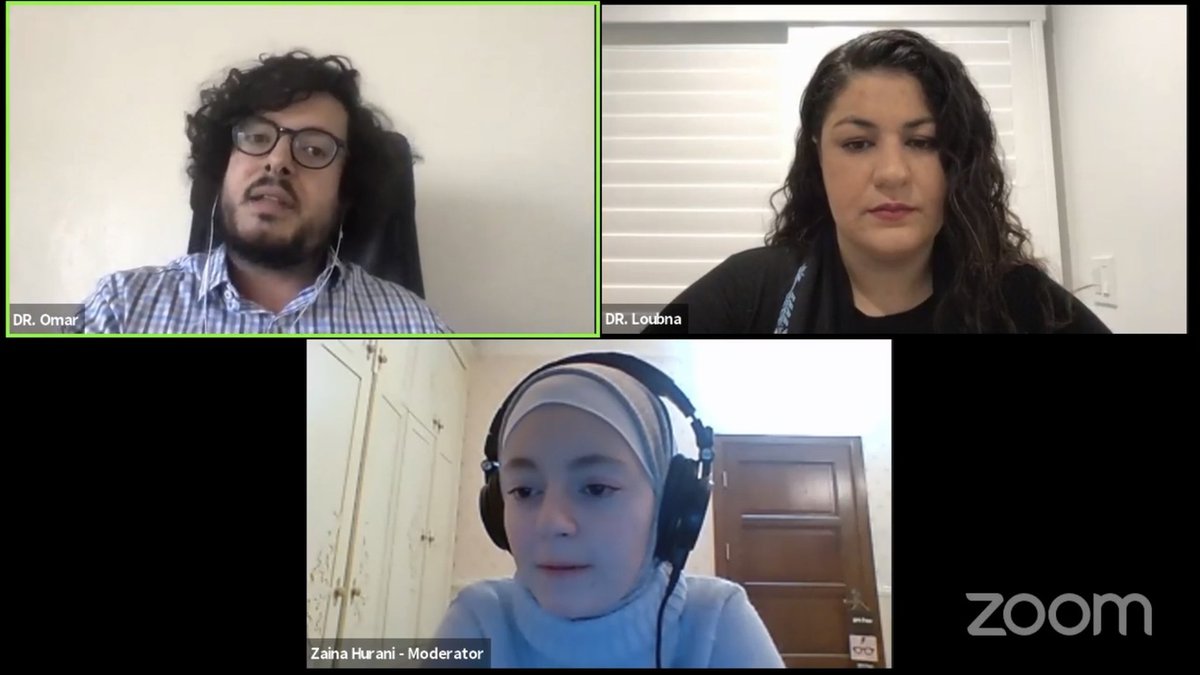 On Friday, January 15th Dr Loubna Qutami and Dr Omar Zahzah visited us for an online discussion on the topic of 'Deepening Inequalities: How U.S. domestic and foreign policy is further marginalizing many Americans and entrenching an apartheid state in Palestine.'

The discussion was moderated by debate team member Zaina Hurani of the Physics department and explored the workshop subject within the following subject areas:  how U.S. policies have currently and in the past led to the deepening marginalization and disenfranchisement of communities across the U.S.,  the hypervisibility and invisibility of Arab Americans, U.S.'s history of colonialism and slavery and how these historical injustices have inflected racial injustices today including a breakdown of the mechanisms behind the phenomenon of 'cradle to prison pipeline.' The session also explored international activism towards the liberation of Palestine, U.S. policy and international law towards Palestine and Israel within recent years and historically, and what steps must be taken going forward within U.S. resistance movements for Palestine.

The speakers were also asked to share their own background and experience with political activism and grassroots organizing within U.S. universities as students and their leadership within movement organizations such as the Palestine Youth Movement, General Union for Palestinian, and Students for Justice Palestine.

The session concluded with questions from the audience including advice and guidance on how individuals based internationally and in  Palestine can get more involved within resistance and grassroots work and political strategy related to the new U.S. administration and congress.

This was the first expert guest panel discussion organized by the University debate society towards one of their core aims of increasing awareness and understanding within the team, Palestinian, and international communities about how international and national policies and daily experiences are interconnected.  It is a core tenant of the debate team members to strive towards a deeper understanding ofthe lived experiences of diverse people from around the world, while also being aware of how global powers, through policies and international relationships, impact those experiences.    Integrating an accurate and equitable representation of these real lived issues within their case-building and analysis is a central value of the team.

Dr Qutami is a long time Palestine organizer and an Assistant Professor in the Department of Asian American Studies at the University of California, Los Angeles. Qutami is a former President’s Postdoctoral Fellow from the Department of Ethnic Studies at the University of California, Berkeley (2018-2020) and received her PhD in Ethnic Studies at the University of California, Riverside (2018). Qutami’s research examines transnational Palestinian youth movements after the 1993 Oslo Accords through the 2011 Arab Uprisings. Her work is based on scholar-activist ethnographic research methods. Qutami’s broader scholarly interests include Palestine, critical refugee studies, the racialization of Arab/Muslim communities in the U.S., settler-colonialism, youth movements, transnationalism and indigenous and Third World Feminism.

Qutami is also the former Executive Director of the Arab Cultural and Community Center (ACCC) in San Francisco as well as a founder, member, and the former International General Coordinator for the Palestinian Youth Movement (PYM).

Dr Qutami has published academic articles and written for or interviewed by news orgs and think tanks on many of the above subjects mentioned including but not limited to Al-Shehbaka and Jadaliyya.

Recent publications include "Censusless: Arab/Muslim Interpolation into Whiteness and the War on Terror" and author of "Before the New Sky: Protracted Struggle and Possibilities of the Beyond for Palestine's New Youth Movement"

Dr. Zahzah is an Independent Scholar, writer and poet who has been organizing for Palestinian freedom and liberation since 2012. Zahzah’s publications on Palestine and Zionism have appeared in various outlets including the Journal of Palestine Studies, Transmotion, Arab Studies Quarterly, Mondoweiss, the Huffington Post, and the New York Times, and Zahzah’s creative writing and cultural criticism have appeared in various literary journals. Zahzah holds a PhD in Comparative Literature from UCLA. Dr. Zahzah’s dissertation, “Undercover and Hyper-Visible: Security Poetics and Pacification Prosaics in African American and Arab American Literature” analyzes how writers have used literature to resist racialized policing and surveillance from the Cold War to the “War on ‘Terror.” Zahzah is currently an active member of the Palestinian Youth Movement and the Education and Advocacy Coordinator of Eyewitness Palestine.